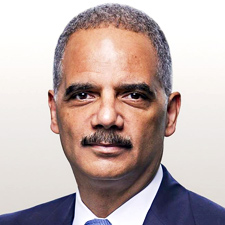 Eric Himpton Holder Jr. (born January 21, 1951) is an American lawyer who served as the 82nd Attorney General of the United States from 2009 to 2015. Holder, serving in the administration of President Barack Obama, was the first African American to hold the position of U.S. Attorney General (in both a confirmed and acting position).

Born in New York City to a middle class family of Barbadian origins, Holder was raised in a predominantly black community but attended school with mostly white students as part of a gifted education program. He graduated from Stuyvesant High School, Columbia College, and Columbia Law School. Following law school, he left New York to work for the Public Integrity Section of the Department of Justice for 12 years. He next served as a judge of the Superior Court of the District of Columbia before being appointed by President Bill Clinton as United States Attorney for the District of Columbia and subsequently Deputy Attorney General. While U.S. Attorney, he prosecuted Congressman Dan Rostenkowski for corruption charges related to his role in the Congressional Post Office scandal.

Following the Clinton administration, he worked at the law firm of Covington & Burling in Washington, D.C. He was senior legal advisor to Barack Obama during Obama's presidential campaign and one of three members of Obama's vice-presidential selection committee. Holder was a close ally and confidant of Obama's and was selected as President Obama's first Attorney General. The Republican-controlled House of Representatives held Holder in contempt of Congress during an investigation of the Operation Fast and Furious ATF gunwalking scandal; the Justice Department's Inspector General later cleared Holder of any wrongdoing. Holder was succeeded as Attorney General by Loretta Lynch in April 2015. He returned to Covington & Burling, where he continues to practice, and is also involved with efforts at gerrymandering reform through the National Democratic Redistricting Committee.